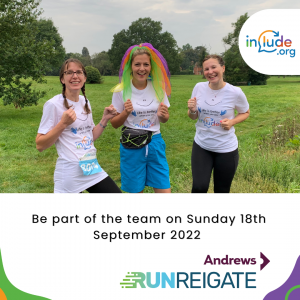 On 27 July some of The Include Choir went along to the Run Reigate Run Club in Priory Park – led by Jas Dhanda from Reigate Priory Athletic Club.

While the runners were put through their paces, we sang and signed some running themed songs like Don’t Stop me Now.

Seeing the runners prepare mentally as well as physically took me back to my 2019 Run Reigate journey. It was before the world-changing events of Covid19, but after some fairly significant events in my own life.

It was the first time I had run more than a few kilometres since breaking my back and neck.

In 2010 I fractured my spine in 7 places, and broke my shoulder, hip and hand when somebody opened their car door into the road as I was approaching on my motorbike.

Thanks to a good quality bike helmet I was incredibly lucky to avoid a brain injury.

When I think how close I came to experiencing the sorts of understanding or speaking difficulties that Include.org tries to tackle, I get a shiver down my (now mended) spine.

I spent 3 months in a rigid brace and it was another 6 months before I could return to work.

If someone had told me then that I would complete Run Reigate’s 10k run, I would have thought they were joking!

I felt so lucky to be able to take part.

At Parallel London in 2017 one of our members David not only performed with The Include Choir, singing and playing the drum – he also got the team’s fastest time at the event’s sensory 1k.

David has a visual impairment – but this didn’t affect his speed! This event, held at the Olympic Park in London, was a real memory maker for David and many of the rest of us.

Memories made for all the right reasons – feeling involved and able to shine.

We’re going to talk more with the Run Reigate organisers to look into the idea of a fully accessible sensory race in the future.

It’s not that everyone wants to aim for the longest distance, or the fastest time that makes events like Run Reigate or Parallel London truly bonding for the community. It’s creating a space for all the personal magic moments that happen along the way.

Sometimes these moments begin months before the day itself…

…The encouraging chat with a friend to enter, the training partner who meets for a morning run in the rain, facing a personal fear or anxiety, overcoming an injury, generous donations to a cause you care about, a way of remembering or honouring someone dear, being boosted by a cheer from the crowds, being offered a jelly baby by a random resident of one of the streets.

On the evening of the Run Reigate Run Club, a magic moment for me was when choir members Hannah and Lynette led the choir, while I turned around to include the runners in “Don’t Stop Me Now”.

In turn, the runners themselves joined in with enthusiasm, even after their gruelling training session!

On Sunday 18th September Include.org will help to create some magic moments at Run Reigate.

We have a stall in the event village, our inclusive choir will perform and we’ll raise awareness of inclusivity. Thank you to everyone who is already onboard.

If you are local, but not involved yet, could you help or just come and support us? Please let us know.

We can offer reduced fee places to runners who would like to raise money for our charity, and we’re hugely grateful for all fundraising efforts.